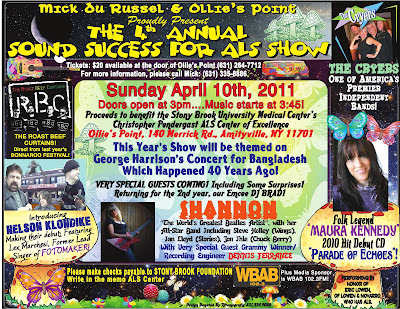 On Sunday, April 10, 2011, I will be hosting the 4th Annual Sound Success For ALS Benefit Show at Ollie's Point in Amityville, NY. Proceeds from the admission price ($20 at the door) and the raffle items will be donated to the Stony Brook University Medical Center's Christopher Pendergast ALS Center of Excellence.
This year's show will feature five nationally known bands with many legendary performers. The show itself will be themed on George Harrison's Concert For Bangladesh, which took place 40 years ago! Each band will play at least one Harrison song or something from one of the performers at that classic event. Among those appearing includes: Maura Kennedy whose debut solo CD "Parade of Echoes" was a big hit last year. She will be performing in honor of Eric Lowen, who has ALS,of the famed songwriting duo Lowen and Novarro.
Nelson Klondike will be making their debut at this event. The band features Lex Marchesi, former lead singer and guitarist of Fotomaker!
The Roast Beef Curtains, a great new band from Long Island. They are rapidly gaining a huge fan base and played the famed Bonnaroo Festival in Tennessee last year! Now we have them with us this Sunday!
The Cryers are one of America's premier independent bands coming in from New Jersey. The are well known across the country and often back up many well known rockers including Joey Molland from Badfinger, Terry Sylvester from the Hollies, Billy J. Kramer, and many more. We are proud to have them come to our benefit!!
Shannon is recognized as the world's most famous Beatles artist. Her paintings are in many museums and establishments. Paul McCartney even owns some of Shannon's pieces. Shannon is also an accomplished musician who has written over 1000 songs. She is coming to the benefit with her all star band that includes drummer Steve Holley from Wings, Ian Lloyd from Stories ("Brother Louie" #1, 1973) , Pete Santora (Beatlemania), and a host of other world class musicians.
Special guest is Grammy winner/recording engineer Dennis Ferrante!
Other special guests will be stopping by. Among them are Miss Senior America Gail King and TV Host Donna Drake. Watch for some surprises!!!
Please come and support a great cause and enjoy some great music too!
If you would like to simply make a donation, please make checks payable to:
The Stony Brook Foundation.
You can mail them to me and I will hand them in with the proceeds from the show. Thank you very much and see you at the show!!