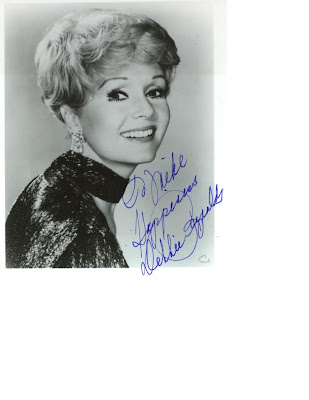 She has been called "America's Sweetheart" in the peak of her career which has spanned six decades. Debbie Reynolds is a living legend from Hollywood's golden age and at age 78 (she will be 79 on April 1st!), she continues to perform throughout the country to the amazement of her cherished fans. I had the great honor to chat with Debbie from her California home just the other day! 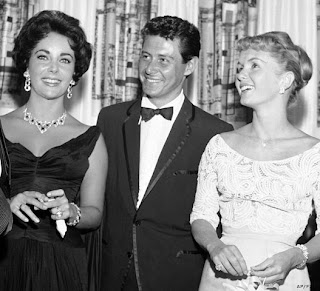 MICK: Please tell me about your upcoming show at the Tilles Center on the campus of C.W. Post in Brookville, Long Island on April 8th!
DEBBIE: I call it a variety show! It's a concert show filled with music and dancing. I do impressions of Barbara Streisand, Marlene Dietrich and Mae West; I do a lot of comedy and also bring my film clips of "Singing In The Rain", "The Unsinkable Molly Brown", "The Tender Trap" with Sinatra. I sing with each of these movie clips too. We do music from Stephen Sondheim, Gershwin and all of those great songs and standards that I loved and grew up with. I do a little bit of everything because the people are coming out to see you and you take them out of their problems in their life for the time that they are seeing the show. I don't do politics and I don't do religion! I try to keep it as light as possible! I do another section of out takes of mistakes from classic films of Bette Davis,Jimmy Stewart and Humphrey Bogart and all the greats. This is all from my collection of memorabilia. I have a very large film library!
MICK: You grew up in Burbank, California, right next door to Hollywood. Who were your favorite movie stars when you were growing up?
DEBBIE: I loved the musicals! I loved Fred Astaire and Ginger Rogers and Gene Kelly! I went to the movies every weekend in the 40's. There were a lot of comedies and musicals and I kind of grew up on them. I loved Jimmy Stewart and Erroll Flynn too!
MICK: I see on your website that you are auctioning off your incredible movie memorabilia collection in June, the largest private collection in the world.
DEBBIE: Yes, I've given up after all these years. I just can't seem to get it done [a movie museum] and the Academy doesn't seem to care. I can't get enough backing people to care about the building of a museum. It's not good economical times. So I'm going to have a big auction in June and another one in December.
MICK: Are you going to keep anything?
DEBBIE: No I'm going to see everything!
MICK: In your extensive collection, what is your most special piece?
DEBBIE: I have Marilyn Monroe's white subway dress, Barbara Streisand's gold dress from 'Hello Dolly", Hepburn's black Aztec dress. I have virtually every star from every Academy Award winning movie! Cary Grant, Grace Kelly, Marlon Brando, Jimmy Stewart, Jack Lemmon, Frank Sinatra and the Rat Pack, Groucho and Harpo Marx. I have the best private collection in the world!
MICK: When was the last time you spoke top Elizabeth Taylor?
DEBBIE: I spoke to her about five weeks ago when she was quite ill. She was trying to get better but there was just no ability to get better. Her back was so severe and her pain was great. They couldn't find any way to help her.
MICK: Did you have a favorite costar?
DEBBIE: I think my favorite costar was Jimmy Stewart. I loved working with him. I also loved Glenn Ford. We had wonderful fun together. I had a great time working with Dick Van Dyke. I really enjoyed everybody! I never did meet someone that I didn't like! I loved them all!
MICK: I read one of your quotes that said " "Singing In The Rain" and childbirth are two of the hardest things I ever did in my life". Why was "Singing In The Rain" hard?
DEBBIE: I was just referring to the one number that was called "Good Morning" where we go over the couch. First of all, I was not a dancer! I had to learn how to dance and keep up with Gene Kelly and Donald O"Connor. That was enormously difficult for a seventeen year old who never danced before to have that challenge! That was a very hard number and Gene was a brilliant dancer. He made me work very hard and I did! I had blood in my shoes! We didn't have any Saturday or Sunday off where we could just pass out for the day. We worked from six in the morning until eleven at night.
MICK: Are you religious?
DEBBIE: Yes, I'm very religious!
MICK: Have you ever had any miracles happen in your life?
DEBBIE: It's a miracle I'm still alive! The fact that I've survived all my bad marriages is a miracle! I'm very happy I got through childbirth alive.
MICK: You've had numerous successes and awards in your illustrious career. What would you consider your biggest achievement?
DEBBIE: For "The Unsinkable Molly Brown', I was nominated for an Academy Award. I worked very hard and I loved that movie. I thought I did an excellent job in that picture.
MICK: What are your upcoming plans?
DEBBIE: To continue doing my shows until I drop dead! I'm going to be just like George Burns and stay on the stage until I drop dead and have myself stuffed like Roy Rogers' horse Trigger! That's the joke on how I'm ending my career. I want to perform as long as I can!
MICK: How would you like to be remembered?
DEBBIE: I'd like to be remembered as a person who cared about other people and was a good mother and a good friend. That's good enough!

You can see more on Debbie at: http://debbiereynolds.com
An Evening With Debbie Reynolds at The Tilles Center Concert Hall in Brookvale, NY, on Friday, April 8th at 8:00PM. Tickets available at Ticketmaster and the Tilles Center box office.
Posted by showbizwizard at 6:13 PM