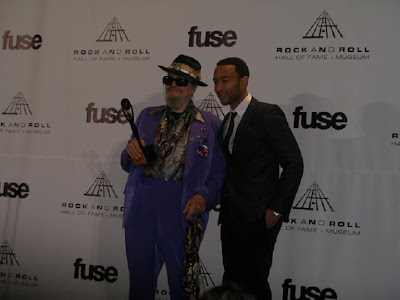 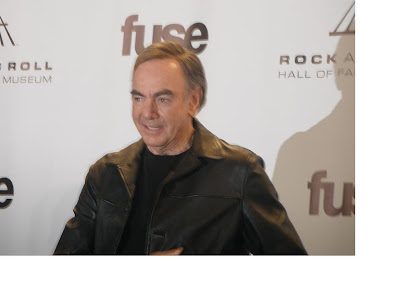 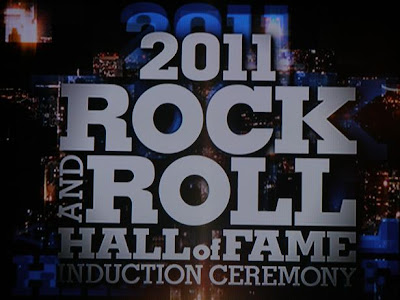 On Monday evening, March 14th, the world of rock united in New York City at the Waldorf Astoria Hotel for the 26th Annual Rock and Roll Hall of Fame Inductions. This year's class was an eclectic group of legends who came to join the elite membership of rock's hallowed Hall. Those inductees included Neil Diamond, Alice Cooper, Dr. John, Darlene Love, Leon Russell, Tom Waits, Art Rupe and Jac Holzman.
John Densmore of the Doors was there to induct Electra Records founder Jac Holzman. Densmore looked like a Confederate general with the long gray jacket and gray hair tied back. Very personable with the press, he seemed to be having a great time. Neil Diamond was dressed in his usual black, a true class act. He said he just flew in from Australia, where he is on tour, and would be flying back the following day. "I would not miss this for the world" Neil told the press. Elton John was there to induct Leon Russell. Elton did all of the talking while the two sat together in the press room. Leon looked like he was in a hypnotic state and showed virtually no emotion at all. I guess his music did the talkin' already! Stray Cat Lee Rocker was there with his beautiful wife Debbie. Lloyd Price was there to induct Art Rupe, founder of Specialty Records. Lloyd is one cool guy. He said he currently manages Icon Food Brands, which makes a line of primarily Southern-style foods, including Lawdy Miss Clawdy food products, ranging from canned greens to sweet potato cookies. He also said he is an avid bowler his whole life and carries a 214 average and even has six 300 games under his belt!! Incredible! Darlene Love was ever so gracious about her induction and gave a real heartfelt induction speech. She is one incredible lady and it's great she finally received her due. Bette Midler was very happy to be there to induct Darlene. Bette is just full of personality that just spreads throughout the room. John Legend was there to induct Dr. John. Legend looked sharp as nails in his perfectly fitted suit. He is not only a great singer but very articulate as well. Dr. John (aka Mac Rebennack) was dressed in a purple suit with beads, a fancy cane and feathers. One of the photographers whispered to me that he looked just like a pimp! So when someone asked Dr. John about his unusual shoes, he said he got them in a pimp shop! It drew a lot of laughs! Alice Cooper (real name: Vincent Furnier) was his typical theatrical self complete with full makeup, a bloodied shirt and a large boa constrictor snake! His band sounded just great, all veterans from Cooper's early days. They were backed by a chorus of school children who were also in makeup!! Cooper said they were thrilled to finally be in the Hall and they just might be the first rock band kicked out of the Hall!! Joking of course!! They were inducted by another hard rocker Rob Zombie!
Those who chose not to meet the press were Tom Waits, Neil Young and Paul Simon. Among those who were present included Bruce Springstein, Michael Douglass and his wife Catherine Zeta Jones, Michael J. Fox, John McEnroe, Dr. Oz and John Mayer.
Next year's inductions will go back to Cleveland, as they do every third year.
Posted by showbizwizard at 7:03 PM