Grand Opening of the SUFFOLK THEATER! 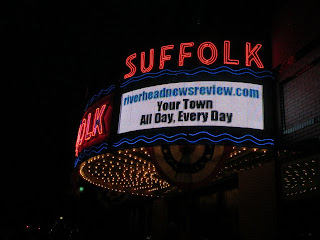 It was 1933 all over again last Saturday night as the newly renovated Suffolk Theater in Riverhead reopened to the thrills of the hundreds who came for the glorious "Back To The 30's" party. And what a party it was!
The theater has just been totally refurbished in every aspect and even the original art deco looks like new. It is nothing short of spectacular!

In front of the theater, old vintage cars lined the street as spotlights scanned the sky. It looked like a Hollywood premiere with the red carpet and the photographers continually snapping pictures. News boys handed out copies of The Suffolk Theater Times, gangsters and old time cops mingled with the crowd as everybody made their way inside. Most of the patrons were clad in 1930's dresses and suits. Fedoras were everywhere! 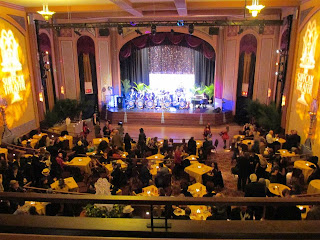 Once inside, the sounds of Grammy Award winner Vince Giordano and the Nighthawks filled the air with music from way back when. The ultra classy nightclub setting was unbelievable with plenty of tables and chairs in the multi leveled theater. With a large bar downstairs and another on the upper level, finding a drink was not a hard task.
Unique hors d'oeuvres were brought around all evening and even some celebrities from the past were spotted in the crowd. We had the pleasure of running into Charlie Chaplin and Mae West! 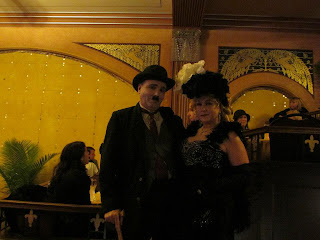 Bob Spiotto, executive director of the Suffolk Theater, did a fine job choreographing the whole evening. Bob is also a well known colorful actor who will be bringing his Danny Kaye Tribute show to the stage on March 10. 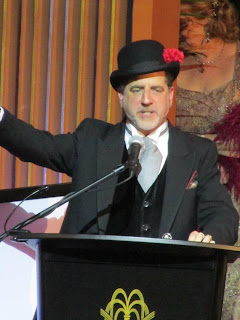 He introduced Diane and Bob Castaldi, owners of the theater, to the the crowd. This has been their dream to bring something like this back to life and they sure have accomplished that in a big way. Diane Castaldi has been aesthetically instrumental in the transformation of this unique and historic theater. 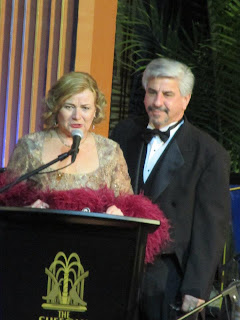 New York Mayor LaGuardia even made an appearance and spoke to the crowd. It was actually famed actor Tony LoBianco, who is currently playing LaGuardia in an off Broadway play "The Little Flower". 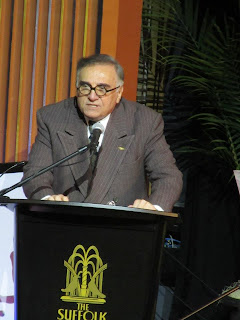 Wonderful world class dancers performed dances from the bygone era as flappers and other patrons joined them. It truly was a sight to see.
There are many great shows coming up and they are happening almost every day. Movies, jazz concerts, tributes ..something for everyone. 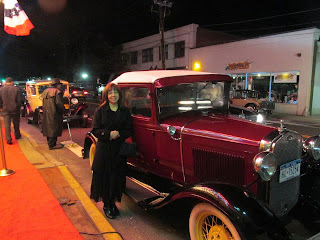 As we left the theater, we passed the old time vehicles once again and stepped back into the future. But we will definitely be returning to this new jewel of Long Island!
Special thanks to all who made this happen including Diane and Bob Castaldi, executive director Bob Spiotto, Kim Folks- director of events and development, Susan Gentile Hackett-director of marketing and public relations, LynnAnn Kolesar- office and box office manager, and Jim Vignato- technical director and production manager. Hats off to their fine work and bravo to the new Suffolk Theater! Let the shows begin!
For more information on upcoming shows, please go to: http://www.suffolktheater.com/
The Suffolk Theater is located right in the heart of Riverhead: 118 E Main Street, Riverhead, NY 11901 | (631) 727-4343
Posted by showbizwizard at 9:03 PM