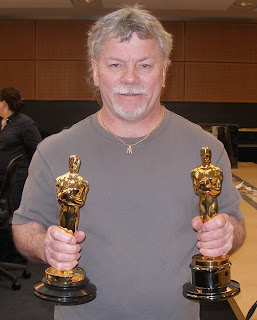 On Sunday, February 24 2013, the world will turn it's attention to Hollywood for the 85th Academy Awards Ceremony where the movie industry honors it's own in ultra grand fashion. The grand prize in each category is probably the most famous trophy in the world, the hallowed Oscar.
Since the first awards banquet on May 16, 1929, in the Hollywood Roosevelt Hotel’s Blossom Room, 2,809 statuettes have been presented. Each January, additional new golden statuettes are cast, molded, polished and buffed by R.S. Owens & Company, the Chicago-based awards manufacturer retained by the Academy since 1983.
Oscar stands 13½ inches tall and weighs in at a robust 8½ pounds. The film reel features five spokes, signifying the five original branches of the Academy: actors, directors, producers, technicians and writers. Although the statuette remains true to its original design, the size of the base varied until 1945, when the current standard was adopted.
MGM art director Cedric Gibbons designed a statuette of a knight standing on a reel of film gripping a crusader’s sword. The Academy tapped Los Angeles sculptor George Stanley to realize the design in three dimensions – and the world-renowned statuette was born.
The Oscars used to be made of bronze but now the statues are made out of britannia metal, a pewter-like alloy which is then plated in copper, nickel silver, and finally, 24-karat gold. However, due to a metal shortage in World War II, the Academy Awards used painted plaster instead for three years. In the early part of the war, plaques were given out instead of the statuettes. 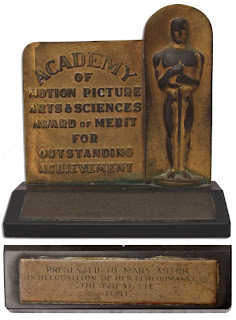 Recently, Mary Astor's 1941 Oscar plaque award sold for $171,089 in a British online auction. When the war was over, the Academy invited everyone who won fake plaster Oscars and plaques to have them replaced with real ones made out of metal. Some people thought that the Academy gave out Oscars made out of wood. In fact, only one wooden Oscar was ever given. In 1938, ventriloquist Edgar Bergen received a wooden Oscar for his work with his wooden dummy, Charlie McCarthy.
It takes 3-4 weeks to manufacture 50 statuettes.I spoke to Scott Seigel, President of R.S. Owens, and he told me that 60 Oscars have been created by R.S. Owens for this year's awards. These Oscars are usually flown to Hollywood in time for the event. This year, for the first time, they are on a road trip across the United States stopping in various cities along the way so people can see and hold a real Oscar. The first stop was in NYC on February 4 followed by PHILADELPHIA, WASHINGTON DC, BALTIMORE, CHICAGO, ST. LOUIS, KANSAS CITY, HOUSTON, DALLAS, PHOENIX and finally THE OSCARS!
Each nominee in every category has an engraved metal plague created to be affixed to the winning Oscar. Only the winner's engraved plaque is saved and the others are destroyed. After the ceremony, the winners take their newly awarded Oscars to the Governor's Ball and that is where the plaques are mounted onto the Oscar.
R.S. Owens also repairs and refurbishes Oscars. 5-6 Oscars come in annually for this service. The cost to do this procedure is almost as much as a new Oscar would cost. In the past year, Bing Crosby's Oscar for "Going My Way" (1944) and an Oscar for "The Godfather" (1974) were refurbished.
It's been over 80 years since that first gathering in Hollywood. Today, Oscar's symbol of film making achievement still has that magical grandeur that makes it the most famous award in the world.

Posted by showbizwizard at 9:05 PM