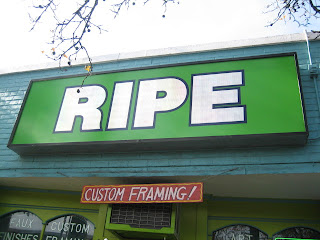 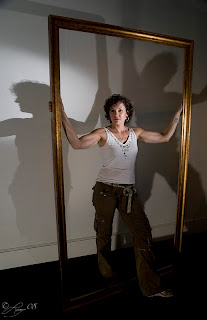 She is talented, pretty, spunky, intelligent and has one of the coolest art galleries around! Cherie Via is the owner of Ripe Art Gallery, located at 67A Broadway in Greenlawn NY. Ripe is also the home to an expert frame shop, folk art gifts and handmade jewelry. Cherie's superb taste flourishes throughout the gallery and wraps it's unique essence on all who enter it's doors. I had the great pleasure to speak with Cherie just days before her big annual Valentine's Day Show "Through Rose Colored Glasses" opens...


MICK: How long has The Ripe Art Gallery been open?
CHERIE: I have been in this location [Greenlawn] for almost five years now but I've been Ripe Art Gallery for seven years. The business started as a house painting business. I used to work with a full female crew and we would do whole apartment jobs. We would get hired for a week while somebody was on vacation and we would repaint an entire apartment or a whole floor of a house. When they returned from their vacation, the whole place was painted and put back together. I got a lot of jobs because we were all females and customers just assumed that women are cleaner as painters! Then I scaled down on my staff and started doing more high end feux finishing and working with decorators. At that point, I needed a location because my paint was freezing in my garage. At that time I was also doing custom framing for my painting clients. So I got my first location in Northport which lasted about four months and I outgrew that location very quickly. Then I took a location in Huntington for one year and that's where I started showing art. I did several gallery shows there and it was a real small space.
I literally had to move out all of my tools and stuff, do the gallery show, then move it all back in. I was only open Wednesday nights and Saturdays! I couldn't afford Huntington so I found this place in Greenlawn and it was the perfect price and the perfect layout! I was still house painting when I moved in there. That lasted for about one year. In June of the first year at Greenlawn, the painting business came to a standstill. No work was coming in. That's when I really started paying attention to the gallery, being there full time and taking on more framing jobs. And that all leads me up to where I am right now!


MICK: How did you come up with the name "Ripe Art Gallery"?
CHERRIE: I was trying to come up with a name using my name in it's title. My last name is Via and I couldn't come up with anything that sounded good. So my boyfriend at the time suggested I use my first name, Cherie. But since it looks like Cherry, it sounded a little risque to use. Then he suggested Ripe Cherry. I said wait....Ripe! I immediately envisioned a sticker on an avocado. That was it! Ripe Art! I went to a graphic designer to make my logo and told her to think avocado sticker. I started collecting avocado stickers from avocados in the grocery store. That's how it came about!

MICK: Are you an artist also?
CHERIE: Yes I am! I am a "mother taught" artist! My mother was an artist and our dining room was her studio. My father would get mad at her a couple times a year and say "We want to eat in here!" She would have to clear off the dining room table, we would eat, and then she would put all of her things back. My mother was very talented but also very shy about it. I was actually a trained musician. The reason I came to Long Island is that I got a teaching job in Levittown teaching high school band for five years. After four years, I became unhappy and left after five years. I then went to work in a book store and that's when I started painting! After I got another job at a frame shop, my boss encouraged me to start selling my paintings. It was all small, folk art style paintings and they started to sell!

MICK: You have a wide variety of shows at Ripe. What are some of your more memorable shows?
CHERIE: The Valentine's Day show every year is memorable. This year is my fifth one. This show is always huge and brings in tons of artists. People really get excited about this one! Another great show was Mike Stanko. I felt really proud to have somebody of his caliber have a show at my gallery. A couple of years ago I showed Ray Lamantia. He's a painter from Bay Shore who is very technically advanced. He does photo realist paintings. When he was interested in showing at my gallery, I was also very flattered. I constantly feel flattered because the caliber of artists who are willing to show in my space keeps getting better and better. I feel that the fingers of Ripe Art Gallery keep reaching out further to the west as well as the east. With the economy the way it is and galleries closing, I feel very fortunate not to have succumbed to the economic times.

MICK: Can we talk about the alcohol incident?
CHERIE: Yes, I am ready to discuss the alcohol incident now that it's all over. It's completely over as of January 11th. It's been totally dismissed out of the court. My attorney found that the verbiage of the law does not actually state what art galleries are or aren't allow to do. There is nothing in the law about art galleries. There is very little in the law about serving alcohol as a refreshment and giving it away. Basically the law says a lot about selling it. Since I have never sold it, my attorney put together 30 objections to the case and was prepared to subpoena the first cops who came to last year's Valentine's Day Show. They were two uniformed policemen who didn't know what to do. They wrote a police report and that was that. The undercover cops who showed up in April never showed up for the court date and gave very incorrect information as far as what I was facing. I actually walked into a courtroom of DWI's and drug arrests and was very thankful brought an attorney with me. My attorney did not charge me for this and I had two court appearances. By the time I got to the second, the DA decided it just wasn't worth taking to trial. The judge dismissed the case under the terms that I kept my nose clean for six months. So I decided it wasn't worth it to have alcohol anymore as this whole fiasco could happen again. For over a year now, this has not affected my business at all. Now I'm serving soda which is sort of a treat to people these days as most don't drink soda anymore. I have candy, get them hopped up on Twinkies, Funny Bones and stuff they don't normally buy. It's really working out for me. Still selling art without the booze! I also have a speakeasy gallery in the back room which is an "invite only" gallery. I've been showing tattoo artists who show their personal work. It's exciting because most people are coming in getting pieces commissioned to put on their body. So to see what a tattoo artist wants to create is very interesting. Both shows I've had back there so far have been wildly successful. The last show I did we sold everything but one piece. People like coming to these shows because by invite only, this makes them feel special. I'm building a clientele who wants to be invited and know when they are being invited through the back door, they are coming to something very special. These events are not publicized. If you don't have a card in your hand, you can't come in. So I'm continuing to book that space more.

MICK: What are the future plans for Ripe?

CHERIE: Going forward, I want to continue doing what I am doing and potentially make a living at this. If I get to the point where I am paying myself, that would make me feel like a success. What I make now basically pays for my lifestyle which is not extravagant at all! I'm very happy I haven't starved yet or my dog hasn't starved yet! Right now, I'm redesigning the website. We are going towards E Commerce so that my artists whom I represent will now be available to a larger market through our website. I'm also in the process of promoting myself as the Rock Star Framer, which is a niche that I don't know anyone has taken. Ultimately I'd like to get to the point if you want to get the Rock Star Framer, you must make an appointment. They would get a special service when they come to see me with special designs...the whole experience from the Rock Star Framer! And then I'm thinking about taking the Rock Star Framer on tour! Go to other cities, showing the artists I represent and building it into a musical theme as well. Maybe picking a bar and having a couple musical artists play as well as show art. That would be fun!! I'm a single girl and I have my whole life involved in this. The website will be up and running with several artist pages in about a month.

MICK: The Valentine's Show opens this Monday evening (Feb. 14th). When is the deadline to submit pieces?

CHERIE: Ideally Saturday. I put it out as Friday the 11th as the deadline but I will still take last minute pieces on the 12th. There's still plenty of room. I expect anywhere from 40 to 70 artists. Last year I had around 60 artists. The year before I had 70. It fills up quickly and of course it fills up at the last minute. Everybody shows up on Friday!<