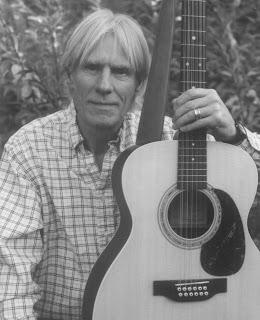 He is one of the original wild men of rock and roll, often found ripping off his shirt and getting down on the ground wailing away on his guitar back in the early 60's. Hilton Valentine went on to become the guitarist for the legendary Rock and Roll Hall of Fame band The Animals. His guitar riff that opens "House Of The Rising Sun" was voted number 29 on the top 100 guitar riffs of all time! He continues to play, though no longer the wild man! I had the great pleasure to speak with Hilton from his Connecticut home...

MICK: Is it true that "House Of The Rising Sun" was recorded in one take?
HILTON: Yes it was!
MICK: Do you still have the Gretsch Tennessean guitar that you used on that classic song?
HILTON: No I don't. I can't even remember what happened to it. I don't have any of my old guitars.
MICK: In 1964, the Animals appeared on "The Ed Sullivan Show". What was that experience like for you and the band?
HILTON: It was a strange experience. It was strange for us to be going on a show that had such a variety of acts. I think there was an elephant there when we were on! And there was that Topo Gigio guy. It was the first time we were on this kind of family orientated situation. There was a feeling amongst us that once we had done The Ed Sullivan Show, that was breaking us into America. That was the show that did it for everybody.
MICK: I know The Animals toured with Chuck Berry early on. What was that like touring with the father of rock and roll?
HILTON: That was amazing. That was the first tour that the Animals ever did in England. We had "Baby Let Me Take You Home" which was our first single that was released in England and because of that, we got to go on the Chuck Berry tour. At that time, there was always five or six acts that were on the bill that went around in a Greyhound Bus kind of thing. We went from city to city in England. The fact that we were working with one of our idols was just amazing!
MICK: And he's still playing today too!
HILTON: He probably still just travels with his guitar and arrives at whichever gig and there's always a band set up for him. He just plugs in, runs through a few songs, goes off to get something to eat, comes back to do the show and then off he goes!
MICK: When the band dissolved in 1966, was there any bitterness among the band members?
HILTON: No, I don't think so. It was all quite amicable.
MICK: Are you still friends with the guys from the band today?
HILTON: Well I wouldn't say I was friends with Alan Price. I'm sort of friends with Eric [Burden]. I saw him about two years ago. We toured together for a couple of years which ended two years ago. I'm not really friends with John Steele.
MICK: You have a new CD coming out this spring?
HILTON: Yes! It's called "Skiffledog On Coburg Street". Coburg Street is where I grew up in my hometown of North Shields, England, which is beside Newcastle. There's a lot of skiffle songs on the album. It was basically relearning those old songs again and singing them, which is what I used to do when I was 13 or 14. There's some original stuff as well.
MICK: Is this an acoustic album?
HILTON: Yes it is!
MICK: Will you be touring this year?
HILTON: As soon as the album is mixed and mastered and pressed! We are doing a gig in Bordentown, New Jersey on March 19th at a place called "The Record Collector". And on April 30th, we will be at The Keeney Memorial Cultural Center in Wethersfield CT. This is the gig with Nick Frasco, the artist who drew the Skiffledog for our last album. An evening of art and music!
MICK: Are there any plans for an Animals reunion?
HILTON: No. The Animals bass player Chas Chandler passed away a few years ago. I can't see the band getting together with a different bass player.
MICK: What are your long range plans, looking past the spring release of your new CD?
HILTON: I just want to get out and start promoting this CD and keep it going. Hopefully I will do another one in a couple of years!


You can find out more about Hilton Valentine on his website