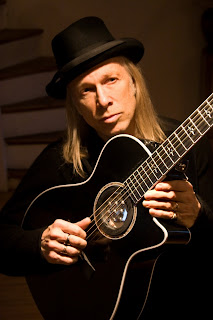 He is not a superstar in the world of rock and roll but he is truly one of it's unsung heroes. Elliot Murphy has carved a nice place for himself not only in music but in the literary world as well. The multi talented and articulate Long Island native continues writing and recording songs 37 years after his first record"Aquashow" in 1973. His current tour is bringing him back to his homeland. I had a great conversation with Elliott from his home in France the other day...
MICK: Congratulations on your new CD. I see that your son Gaspard is the producer!
ELLIOTT: Yes he is! It's actually coming out in January here and in Europe.

MICK: Is your son still in college here in New York?
ELLIOTT: Yes he goes to Purchase College up in Westchester.

MICK: What memories do you have about growing up here on Long Island?
ELLIOTT: Oh there's many! I suppose it was very different when I was growing up in the 50's and 60's. We went to Jones Beach in the summer and Eisenhower Park. I won the New York State Battle of the Bands there in 1966. It was a pretty typical American, suburban upbringing. Spent a lot of time in the car listening to the radio. One big difference was that there was so much great music on the radio back then. I can still remember the DJ's Murray the K, Cousin Brucie in the 50's and early 60's. Later on, it was WLIR with Dennis McNamara..did quite a few shows for them myself! It was mostly good memories for sure. It was so close to the city too. The city was this huge spotlight that I wanted to get close to. Garden City, where I grew up, was only 40 minutes away! Once I got old enough, I spent a lot of time in Greenwich Village.

MICK: Does any of your family still live here?
ELLIOTT: Yes, most of my family is there. My mother lives in the city. She's 85 years old. My brother Matthew also lives in the city. He's also a tour manager, most lately with Steve Martin and his bluegrass music tour. My sister, who is an artist, lives out in Amagansett.

MICK: How long have you lived in France and why did you move there?
ELLIOTT: I moved to France twenty years ago in 1989. I moved there for a couple reasons. I first came here in 1971 before I ever recorded. That trip to Europe changed my life. I went to Amsterdam, Belgium, Brussels, Paris and then down to Rome where I did a bit part in Federico Felinni's movie 'Roma". I was singing on the streets all over and it kind of released whatever creative juices that were inside me. Somewhere deep in my heart I always wanted to come back. Then, the mind followed the heart. My career always did better in Europe than in the States although in the early 70's I did get quite a bit of airplay. I came over here doing shows in the late 70's and was amazed at the response from the public and the critics. In the late 80's, I was almost exclusively touring in Europe. Finally in 1989, I made the move here.

MICK: You've been called a road warrior because you do over 100 shows a year. Is touring still a thrill for you?
ELLIOTT: Touring is still a thrill! I don't do as many as 100 anymore. That was about five years ago. When you do 100 shows a year, that almost like 200 days on the road, either coming home from a show or going to a show. We still do around 70-75 shows a year now. It is still thrilling for me. I tour mainly in Spain, Italy, France, Switzerland, Belgium, Holland, Germany, Scandinavia. Those countries are still exotic to me even though I've been here so long. If I was still going to Cleveland instead of going to Barcelona, I don't know if the thrill would be the same! I'm sure the audience would be just as great as my audiences everywhere are wonderful. The traveling is so much part of the formula.. 8 hours for two hours on the stage. That little element, still in Europe and still exotic, keeps it interesting for me.

MICK: Up to this point, what would you say is your most memorable moment?
ELLIOTT: Wow, there's been so many. I would have to say, it was about four years ago, Bruce Springstein was playing at the Parc de Princes in Paris, France (a big outdoor arena with about 60000 people). He had invited me onstage to sing with him a number of times as we've been friends since we both put out our first albums at the same time. We were reviewed together in Rolling Stone Magazine and been friends since then. I was backstage with Bruce and he said "Why don't you come up tonight to sing something with me!". 'How bout doing "Born To Run"". I said that's a tough one as that song is like a symphony. My son Gaspard was sitting right next to me and he said "Dad, I know all of the chords to that song and I'll teach it to you". Bruce said "You know that song? Ok, then you're coming up onstage too!" So there we were, both of us, on stage singing "Born To Run" in front of 60000 people at the encore of Bruce's show which is like all hell has broken loose. That was pretty memorable!

MICK: Why do you feel that your music has encountered commercial resistance here in the United States?
ELLIOTT: There are so many elements in the answer to that question. It's hard to focus on just one. Early in my career, I didn't have good luck in finding the right management. I jumped from record company to record company, manager to manager. I couldn't get in a situation that gave me a chance to build some sense of consistency. So that was just kind of bad luck. I think I didn't put as much emphasis on playing live as I do now. Over the last 10-15 years, I've enjoyed playing live more than ever. I was probably impatient thinking my career should have been moving faster than it was where in retrospect, when I look back, it was doing just fine. All of those early albums made it to the low numbers of the charts somewhere and I should have been happy with that and been out there playing more. If I could do it over, I would concentrate more on playing live and really bring the music to my fans instead of depending on the record companies and radio play to do it.
MICK: I love your quote " Literature is my religion but rock and roll is my addiction". Who are your favorite authors?
ELLIOTT: I'd have to say F. Scott Fitzgerald's 'The Great Gatsby" has always had a special place in my heart and takes place on Long Island. I used to ride around those North Shore areas and see those huge mansions. I also loved Jack Kerouac with his vision of America and how he described it. Just beautiful. John Steinbeck for his social conscience. Also authors as diverse as Graham Greene, the English writer. Elmore Leonard is one of my favorite writers.
MICK: Are we going to see any new literature from yourself in 2011?
ELLIOTT: I've been working on a book for a while. I had a novel come out a few years ago in France called "Poetic Justice", a western. It hasn't been published in English yet. I'd like to make that happen. I'm always writing. The reason I said 'Literature is my religion but music is my addiction" is that I need that kind of solitude and quietness and the way writing kind of centers me and then I still love the excitement and thrill of rock and roll. I really do need the both!
MICK: You've been writing and recording for over thirty years. Is there anything you still want to accomplish?
ELLIOTT: Oh there's so much! Just by nature, any artist is unsatisfied. Every album, when I listen back to it, I think I should have done this or done that and next time I'll do it better. A few things I wanted to accomplish I've already done. I wanted to do a double album and I did that with "Strings of the Storm". I wanted to do a blues album and I did that with " Murphy Gets Muddy". I would like to do an album of covers, songs that were real essential to me when I first started playing guitar at 12 or 13 years old. That's kind of next on my list.
MICK: I know Jann Klose has opened for you on some shows. Will he be joining you for any of your local shows here?
ELLIOTT: Not on this tour. Jann is on his own tour right now. With Jann, we were playing in wider markets like Washington, Philadelphia, Boston. These six dates are all centered around New York. With my shows, since it's so rare for me to come to America, I like to do long shows..a good two hours. Sometimes when you have an opening act as great as Jann is, it cuts away the time a bit. I've had some people come to my shows and say they've been waiting 35 years to see me live! So I figure I have to give them more than a sixty minute show! I love to play long shows. We just get going after the first hour!
MICK: When writing a song, whats comes first..the music or the words?
ELLIOTT: In the beginning they came together and that was miraculous. My brain and my body were so in tune with each other because the music is more of the physical part and the words are the mental part. More often than not, I'm writing words and then the music comes after. Very often times the first verse is like a chorus or a phrase with the music. Once I get that, it's one percent inspiration and 99 percent perspiration to finish the song.
MICK: When are you most creative, morning or night?
ELLIOTT: With music, it's the night. With writing, it's the morning! Opposite ends of the spectrum!
MICK: What are your New Year's Resolutions for 2011?
ELLIOTT: Try to be nicer to my band! Sometimes after a long day of traveling you can find yourself pretty hard to deal with. I have a great band. These guys are all from Normandy in France. Olivier Durand , who is my incredible guitarist, has been with me for 16 years. He is a treat to travel with too. He does to the acoustic guitar that Jimi Hendrix did to the electric guitar. He is really phenomenal! Other resolutions are what I ask for every year..to stay in the moment, appreciate what I've done and what I've given, and try to move forward the best I can!
Elliott continues to move forward in our direction with these upcoming shows....
http://www.elliottmurphy.com/
Posted by showbizwizard at 10:09 AM