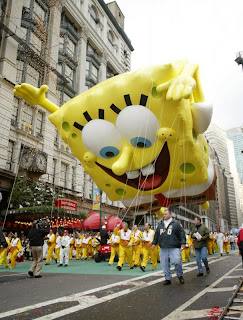 Everybody loves a parade and I am no exception to that proverbial rule. Since childhood, the pageantry of the passing floats, marching bands and the whole extravaganza captured my imagination. And there was no greater parade than the annual Macy's Thanksgiving Day Parade. As a child, I always made sure to wake up very early so I didn't miss one minute of grandest parade of them all. Even on TV, those giant balloons were breathtaking. It's always been a tradition for me even after all these years!
Last year. I decided to finally take the trip into New York City and see the legendary parade in person. My son Mikey, who was 20 at the time, was anxious to go with me. So on Thanksgiving morning, around 4:30am, we made our way to the railroad station and caught a packed train to the Big Apple. Once we arrived, the sun had just risen and there was magic in the air. The temperature was a balmy 55 degrees. Everybody hustling and bustling towards the parade route. We walked a few blocks up Sixth Avenue until we found a less crowded corner. That would be an ideal place to see the parade!
Soon, the sidewalks began to fill with a multitude of anticipating parade watchers of all ages. Old and young, families and couples from all over. The excitement was beginning to build. Happy people and smiles were all around!
We had our space right in front of the crowd and anxiously awaited big event. Next to us was a young couple. He was from Bellmore, Long Island and she was visiting from Texas. Really nice people. They said they were waiting for the friend to join them shortly. As they scanned the crowd, they saw their friend across the avenue. Crossing the street, the friend arrived with her young son. She was a pretty blond woman and her son appeared to be around 4 years old and looked exactly like Ralphie from the classic Christmas movie "A Christmas Story". Blond haired also with big black glasses. We soon found out that this little boy's name was Tommy.
The parade began and it was indeed fabulous! Clowns and marching bands went past us just a few feet away! Tommy was awe struck as gigantic balloons passed by and towered over him. A contingent of police officers were in the street watching the crowd and making sure everything went well. The main police officer was a middle aged, burly Irishman, Officer Kelly, who noticed little Tommy watching the parade. "What is your name little boy?" asked the jolly policeman. "Tommy" replied the young mom "and today is his birthday too!" The policeman thought that was just great and loudly announced to the crowd "Listen everybody! Today is Tommy's birthday! Everybody sing happy birthday to Tommy!". With that, the people in that whole section of the crowd began to sing! They yelled and cheered for Tommy as the parade passed by. He was obviously embarrassed but definitely happy. Then Officer Kelly took Tommy by the hand and brought him several feet into the street to stand next to him. Now he was practically part of the parade! As the bands and the various clowns went by, they would come close to Tommy to slap him five or sprinkle him with confetti. Tommy was elated. You could tell he was having the time of his life. When the huge balloons of Sponge Bob and Shrek passed by, Tommy just looked straight up and couldn't believe he was this close to his cartoon friends. I'm sure he thought this must be a dream!
As the parade was nearing to an end, we said goodbye to our new friends and wished them a Happy Thanksgiving. Tommy and his mom soon disappeared into the crowd as we walked back to the train station. It was truly a great day so far for me and my son and turkey dinner was only a few hours away. I'm sure little Tommy told everybody at home about his amazing day. He probably still had some confetti in his blond hair. It just may have been the best time in his brief life so far! But Tommy may only find out how special his day really was is when he goes to his next parade. Happy Thanksgiving Tommy wherever you are.
Posted by showbizwizard at 7:19 AM