She became a well known, award winning author with five nonfiction books, including "Ghosts Of Long Island" and "Ghosts Of Long Island II". Now KERRIANN FLANAGAN BROSKY has written her first fiction novel "THE MEDAL" and though it has just been released, it is getting rave reviews from around the world. The inspiring story that Kerriann has written involves lovable characters whom we all can relate to, Padre Pio ( one of today's most revered Saints) and a miracle that will not only surprise you but warm your heart at the same time. I spoke with Kerriann recently prior to the books release... 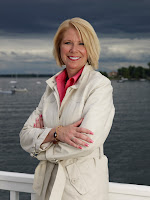 " and sign books. Don't miss this this wonderful evening with one of Long Island's most gifted and loved authors!

Posted by showbizwizard at 7:50 PM