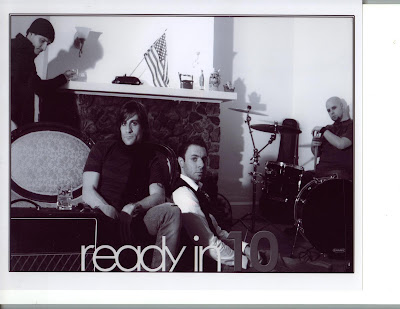 There's a new band on the horizon and I'm sure you will be hearing a lot about them very soon. Based in Babylon, "ReadyIn 10" is more than ready to take the world by storm with their unique style of songwriting, musicianship and the lead singing of Sal Nastasi. I had the great pleasure to chat with Sal the other evening...

MICK: Your new CD "31 Strong " sounds great! I've been listening to it quite a bit. How is the CD doing so far?
SAL: It's going really well! We are getting a lot more downloads from this CD than from our previous CD "Face The World". "Face The World" has been around a lot longer but this one is picking up a lot faster.
MICK: The band is very reminiscent of Bon Jovi. I say that in a very positive way. Have other people told you that?
SAL: We hear that all the time. I'm a Bon Jovi fan and I know my voice sounds a little like his. I don't take that as a bad thing. I like Bon Jovi and I buy tickets when they come around.

MICK: How did you guys all get together?
SAL: Marc Viola (the guitar player) and I have known each other for a long time. Our parents are good friends. We were in search of a bass player and we found Mike Elefante, who was playing with another band. We auditioned for a drummer and that's how we found Mike Moore. Our current lineup has been together for three years now!

MICK: Is it true you came up with the name "Ready In 10" from a Chinese menu?

SAL: Yes, that really is true! We booked our first show in February 2005 at The Bitter End in NYC. The venue needed to make a flyer so they asked for the name of the band. Quickly, I looked down at a Chinese menu and thought "ready in 10" sounded cool so we went with it!

MICK: How did you come up with the name of your current CD "31 Strong"?

SAL: 31 Strong is address where our studio is. It's the place where we hang out and everything happens!

MICK: I see that the band did quite a few charity events last year. Are there more planned for this year?

SAL: We are always doing charity events. Right now, we are trying to get together with Wounded Warrior and any other veteran's charities. We just recorded a new song called "Freedom's Cry". We put it up on I-Tunes a few weeks ago and we are going to donate all of the money we make from the downloads of that song from now until September 11 to all sorts of different veterans charities. The song was written by our drummer Mike Moore's uncle, who is a veteran. He wrote the song six or seven years ago and he thought I would sound great singing it. I was messing around with it and I recorded it. It actually came out pretty good! So the CD is out and we are pretty excited about it!

MICK: "Ready In 10" has been announced as the official band for this year's Marcum Workplace Challenge to be held at Jones Beach State Park on July 26, 2011. What exactly is that?

SAL: Workplace Challenge does events all over the world. Originally, Chase was the sponsor but now Marcum does it now. They get many local businesses and companies on Long Island to compete in a 3.5 mile road race at Jones Beach. They do it every year. At least 10 thousand people compete and it's a really nice event. Our band was asked to play this year. A couple of years ago, I sang the National Anthem at this event which was very cool.

MICK: Speaking of the National Anthem, you were also chosen to sing it at the Long Island Ducks home opener this year! How did that go?

SAL: It was great! A little chilly that night but it was great! They had a nice sized crowd that evening.

MICK: Are you a baseball fan?

SAL: Yes I am! I don't really follow the Ducks that closely but I do go to a few of their games. I'm actually a big Mets fan!

MICK: It seems that the band has a close relationship with the New York Jets. Are you doing anything with the team this year?

SAL: I'm not sure if anyone is is the offices right now because of the strike but I assume we will be doing something with the team. I usually sing one National Anthem a year for the Jets. At the end of the season last year, I wrote a theme song for the team. They seemed to have liked it. I sent it to them two days before they lost their last playoff game. I'm hoping they pay some attention to that this year. The song came out great. It's called "Jets Fans Get Up" and you can actually see it on YouTube.

MICK: How long does it take you to write a song?

SAL: Well, that particular song is kind of cool. We played in Times Square at a Jets rally on the Thursday before that big playoff game. Steve Overmyer, who is the award-winning field reporter for Jets Post Game Live and Jets Nation on SNY, came up to me and told me the Jets needed a song. "I don't know how fast you can write one but if you get me a song as soon as possible, I know the Jets are looking for one". So for the next two days, i kept thinking about it. On Saturday morning, I got! I locked myself in my basement, wrote it in two hours, recorded it, did a little video, and got it over to Steve. He said they really liked it! Then the Jets lost the game to the Steelers so that ended the season. So hopefully this year they pick up on it again!
MICK: You've opened up for some pretty big bands such as the Goo Goo Dolls, Fall Out Boy, Incubus, Poison, and Lifehouse.
What was your most memorable opening show?
SAL: It has to be the first one. We opened for Fall Out Boy. That show wasn't on the big stage at Jones Beach. It was on the concourse stage. The place was packed. People just came rushing over to our stage and that was very cool. That was the first time we played in a venue that size with so many people around that we didn't know.
MICK: Who are your influences musically?
SAL: Personally, I listen to everything. From The Beatles, Led Zeppelin, to basically whatever is on the radio. I listen to 101.9 WXRP. Alternative rock and classic rock. I've always been a big Zeppelin fan.
MICK: What's on the agenda for 2011?
SAL: We are probably going to put out a live CD within the next few months. Things from a few different shows that we've recorded in the last year or so. Hopefully it will be out later this year or early next year. We just want to keep playing a lot. The writing is very important to us but we aren't constantly writing. Mark and I are the main song writers in the band. Mike Elefante, our bass player, writes some of the music as well. We don't pressure ourselves writing so when we get a bunch of songs written, that's when we put out another CD. Right now, we are in the performance mode. We want to tour and play as much as we can. We all love being on stage, playing together and traveling together. We are all great friends! Just play, play, play and hopefully there's a CD in there somewhere too!