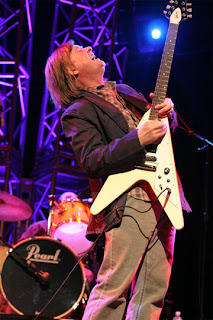 This weekend will be the eleventh edition of the Riverhead Blues Festival in Riverhead, New York. Over 30 bands are scheduled to perform on Saturday July 18th and Sunday July 19th. Among the artists appearing includes this year's headliner, legendary British blues band Savoy Bown featuring one of the world's greatest guitarists Kim Simmonds. From the mid 1960's till today, Simmonds has blazed a trail of blues that paved the way for many of the great blues players to emerge since then. I had the great pleasure to speak with Kim the other day and he shared some great memories and insight about his life and music.

MICK: How did you come up with the name Savoy Brown?

KIM: We were looking for a name, as we were a traditional blues band to start with. Calling ourselves Kim Simmonds or John O'Leary [an original member] didn't seem appropriate as it didn't have that Southern American zing to it. We were looking for a name like an old blues guy perhaps...Savoy Brown sounded good, like James Brown, Charles Brown, Nappy Brown. Lots of Browns around!! So Savoy Brown sounded like an old blues guy. As we developed, we dropped the Blues Band and became just Savoy Brown

MICK: How was Savoy Brown received by the public when you first came to America?

KIM: I think immediately we were received with open arms. We were playing American music and I think we were doing it very authentic. Maybe one of the first bands to catch that authentic feel. A lot of the blues artists we jammed with at that time, like Bobby Bland, were quite surprised we had such a grasp of the blues. So when we came over, the older established blues guys seemed to embrace us as did the fans also because we were doing something a little different

MICK: You've had many personnel changes throughout the years in Savoy Brown. Do you keep in contact with any of the former members?

KIM: Well the Foghat guys I kept in touch with and still do. Roger Earl lives on Long Island and we stay in touch. He not around this weekend when we are playing or I'd invite him down. Of course I kept in touch with Dave Peverett and Rod Price before they passed away. We were actually very good friends. What usually happens with people it comes full circle, unless there's bitterness between people. When the full circle turns, you realize you've got a lot in common than you have not in common. You realize the people that were in the band were the kind of people you'd want to become friends with. Of course, there's water under the bridge like family and like a family, some people have resentments and are bitter as family members are and I don't keep in touch. On some dates, old band members will show up and its a lot of fun.

MICK: It's been said that because of the many band member changes, Savoy Brown was never able to achieve "superstar" status. What are your feelings on this?

KIM: No, I don't think that at all. I think the actual changes in the band were positive. Nowadays, it doesn't matter anyway. There's hardly a band that stays together. When I look back, it was all those changes that kept the music fresh and every album that came out had a different sound but it was still blues rock. I think it was really helpful. What really stopped the band from becoming superstars was we never signed with a really strong label. We were about to sign twice. Atlantic and Warner Brothers. Never quite pulled off the business deals. Had we done that, it would have been guaranteed some songs at the top of the charts. It was offered to us. So that's what stopped the band because the label we were with could only get the record so far. They could only put so much money into us. Therefore, that's why we never could achieve superstar status and in many ways, I'm happy with that because it almost killed me anyway. Any more success I don't think I could stand it!!!

MICK: What are your current projects?

KIM: I have a new record coming out this summer, a compilation Savoy Brown record with music from the last 15 years. It's a period that a lot of people perhaps have missed and maybe haven't seen the band since the 70's. So I'm very excited. It's a very good record and it captures what I've been doing for the last part of my career. It's coming out very shortly. It actually surprised me when I heard it because it's more bluesy than I expected. Your contemporaries sometimes influence what you play and what you record so when I put the best of the last 15 years together, it's a solid blues record and I'm very happy with it.

MICK: What are your long range plans?

KIM: I have that new solo record out called "Out Of The Blue", an acoustic solo record . I'm playing very very well and I'd like to capture that on record. Next year I'm planning a new studio record. People have mentioned some new ways to approach a new cd. Just to continue dong what I've been doing. I'm painting also on a daily basis so that takes up a lot of time when I'm off the road.I think a long range plan is to develop my painting and remain as creative as possible. I don't want to say "well I've reached that point where I can't write a new song, it's too hard..I can't do this or that". I've seen it happen to a lot of people and don't want that to happen to me. So I paint and do other creative things to keep the spirit going. So when I sit down to write a new song, whatever, I know that side of my brain hasn't seized!!

MICK: What type of paintings do you do?

KIM: I use oils and acrylics. I do landscapes in acrylic. It's challenging and I really enjoy it. I do abstracts in oils but really my calling card is my guitar paintings. I am a guitarist and I know the essence of a guitar. On my acoustic record "Out Of The Blue", the solo cd, there's a painting of one of my guitars. So that's already kind of gone into what I do. We've started to integrate it a little like that so the artwork is my painting. The guitar paintings could be oil or acrylics.
It's very interesting, it helps the guitar player in me, you have to solve problems. I think it helps. just being creative period is a good thing. There's been times in the past where I haven't done that and of course your guitar playing starts to go down. If I'm not playing guitar I've got to do something to keep that spark going. The whole idea really is that I've got something to prove. When I go on stage playing guitar I want to prove that I'm still one of the best.

MICK: Speaking of guitars, do you have a large guitar collection?

KIM: I wouldn't think so. I've got way too many, you know, and I'm not that kind of guy to just collect them. A lot of musicians have all these instruments and what are you going to do with all of these...put them in your attic? In your grandmother's house? Your basement? Where are you going to keep all the guitars? Unless you're Michael Jackson or something, you've got millions and you have a storage room! It's pointless especially if you're a musician like myself. I'm not a collector. I'll let somebody else do the collecting. I've got too many guitars and I don't have that many but it's too many for me!

MICK: Which artists do you admire?

KIM: I admire the old guys! The young guys still have to prove themselves. The problem with today's music scene is some of the great popular artists talk about retirement and they're in their 30's and 40's. It's bizarre. I started listening to John Lee Hooker when I was 13 and a few years ago before he died, he was still making great music that I was buying! That's a very satisfying feeling when an artist doesn't let you down for years and years. I like John Hammond. I saw John Hammond the other night and went as a fan. I admire him very much. I admire people who are still doing it and haven't packed it in. for whatever reasons. You've got to admire the Rolling Stone, the Who, Eric Clapton, my contemporaries I guess of sorts though they're older than me. I admire anybody of the older ilk that gives me inspiration . That's what we all need. I like a lot of what I hear from the younger crowd as well. There's a ton of talented people out there but essentially I'm a blues guy and that's what I listen to. Invariably I still find myself listening to the older guys I'm afraid!!

MICK: Tell me something about yourself that people would be amazed to know, something they don't know about you?

KIM: Well, i'm actually a family guy. They might be surprised to realize that's the most important thing in my life and always has been. I haven't been that successful with it at times at being a dad. Having a family and being in a regular family life has always been really important to me. I don't really think I'm very proud of the achievements I've had . I don't carry a sense of who I am much. It's not reality to me the past as Savoy Brown or my achievements as a musician. I think what might surprise people is how much I can put that aside and just be a family guy and really enjoy life away from the spotlight.

MICK: When all is said and done, how would you like to be remembered?

Kim will be performing this Saturday, July 18th with Savoy Brown at the Riverhead Blues Festival in Riverhead. Sunday, he will be performing solo. Come out and catch the legendary Kim Simmonds and you will undoubtedly go home saying "wow, that was one o the best guitar players I've ever seen!!!

For more information on Savoy Brown and Kim Simmonds, please visit:
http://savoybrown.com/
Posted by showbizwizard at 5:07 AM