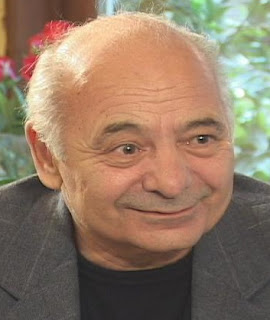 Burt Young is truly a man for all seasons. Academy Award nominated Actor, artist, writer, playwright, he does it all with style and dignity. Best known for his role as Sylvester Stallone's brother-in-law Paulie in all of the "Rocky" films, Burt has appeared in over 70 films and show no signs of slowing down. His artwork is in collections all over the world and enjoys painting practically everyday. I spoke with Burt recently just after his art show at the Nassau County Museum of Fine Art opened on Oct. 1st...
MICK: How long have you been painting?
BURT: Forever! When I was 12, I won a New York City art department contest. I did a painting about playgrounds or bicycle safety. I've painted my whole life.
MICK: Does it take you long to complete a painting?
BURT: Usually not. I'm usually pretty crazed and I'm painting all night long.
MICK: I know you use acrylic paints. Do you use any other mediums?
BURT: Yes i do! I use oils and ink. Sometimes I combine acrylic and oil.
MICK: How long have you had your art studio in Port Washington?
BURT: I've been here about 3 years now.
MICK: Do you paint when you're working on a film?
BURT: Yes, sometimes right in the hotel room. I was staying in the Four Seasons Hotel in Philadelphia and I did a couple of splendid paintings in the bath tub!
MICK: You are an accomplished painter, actor and author. What do you like doing the best..acting, painting or writing?
BURT: It's all communication whether you're a musician or a poet, there's thread through it all. Writing makes me feel bright sometimes when I make something that makes a little sense. Acting satisfies me sensually. I get lost. When I get used to doing the work, I'm riding high day and night. Painting does the same thing. I have more control over my own elements. I'm not worried about editors or directors, it's just all of me.
MICK: Do you have more shows coming up in the near future?
BURT: I have two coming up at a galleries in Manhattan. I keep a lot of my work here in Port Washington.
MICK: I was really impressed with your paintings at your art show in the Nassau County Museum of Art. It's the first time I've seen your work in person!
BURT: Thank you Mick. Sometimes I even impress myself!
MICK: As an artist, which artists do you admire?
BURT: I like the impressionists, the fellows who invented from inside out! When you go back, you can't help but admire Michelangelo, Rembrandt. People like Renoir and Monet saw with their eyes but they told you what their stomach was feeling. I sort of get that feeling very well.
MICK: Do you have any new films lined up?
BURT: Yes, I'm just finishing a movie called "The Win Win". It's a good movie with Paul Giamatti, a wonderful guy and a wonderful actor. A top group of actors. It's for Fox.
MICK: Any more plans to work again with Sylvester Stallone?
BURT: I would love to! I was so pleased to hang out with him on "Rocky Balboa". The guy is just a force! He carries everything from producing, directing, starring. He was just unstoppable. That was 17 years after the last Rocky movie! To me, in my opinion, "Rocky Balboa" was a flop. But 17 years to come back, that was so exciting! He wrote clear and clean and he performed that way too. It was a pleasure hanging out with him on the last one.
MICK: Do you keep in contact with him?
BURT: Oh yea. Actors are funny people. We either see each other by accident or when we have an assignment. I'm not really a Hollywood guy. I hang out in the old neighborhood and with my girlfriend. I'm not too "actorish". I've never been that way.

MICK: You've worked with many directors. Do you have a favorite?
BURT: Yes, I have favorites for different reasons. Sam Peckinpah was a crazy friend of mine. I think I did four or five movies with him. Close to being a genius. Robert Aldrich is another stand up guy that carried a team with him for 20 years or so. Same editor, same cinematographer. Many many directors I appreciated. I never really had a problem. I usually just do it my way though I'm not like a bully, usually with thought and knowing. I always feel that an actor, if he does the right homework, should know more about that character than the author. I think that's my responsibility to get the premise of what the author is feeling. Hopefully, my own research will take me deeper than where the writer was going. I have to make that person honest or even dishonest.

MICK: Do you still have your restaurant in the Bronx?
BURT: We closed three years ago. Not out of necessity, the two old guys that were really the heart of it were in the 70's and they just had enough. They wanted to get out of the kitchen and years there. It was a good place and good friends there.

MICK: Are you a sports fan?
BURT: Yes! I like the Yankees. What a team! A great bunch of players from top to bottom. And you can see they're having fun too. I love boxing too.

MICK: Do you have a favorite boxer?
BURT: I've got many! My good friend is Muhammad Ali. Once, I did an exhibition and did three rounds with him. I used to move around pretty good. That's how we became friends! Mike Tyson is a friend. I feel that he just might have been the best fighter ever. He was something else. I think he was a stronger version of Jack Dempsey.

MICK: Are you a religious man?
BURT: I believe that something made us. I don't know if I listen to man's religion to much. It's like politics, Republicans or Democrats, everybody that stands on a pedestal usually has self indulgence in mind. I do believe in an overall supreme being. Look, we all have pieces of Mussolini, pieces of everybody because nothing ever leaves the atmosphere. So it may be just a touch of one atom that's in us,. We are all regurgitated and recycled. I don't think I have any memory of that,, it would be nice if I did! When I get old I will start getting more religious.

MICK: What is your favorite time of the year?
BURT: I like Christmas! I like winter. I like the elements, I like rain. I like something that gives me a challenge to get out of the house. California was pretty tepid to me. I raised my kid there but I'd rather be in New York City .
MICK: How long have you lived on Long Island?
BURT: I've lived here about three and a half years. I chased my girlfriend out here!
MICK: What are your future plans?
BURT: I have a one character play that I wrote. It's called "Artist Found In Port Washington Flats". It's a one man show and I'm trying to see if I'm full of baloney or if it has some merit for an audience. I'm just testing it's wings now!
MICK: Is this something you will be doing locally?
BURT: I will do it all over the world if it works. It's 90 minutes uninterrupted. I will keep me sharp, that's for sure!
You can see Burt Young's fantastic paintings: Friday October 1, 2010 - Saturday January 15, 2011 from 11:00am - 4:45pm
Nassau County Museum of Fine Art
One Museum Drive
Roslyn Harbor, New York 11576
516.484.9338
www.burtyoungartandfilm.com
Posted by showbizwizard at 7:17 PM