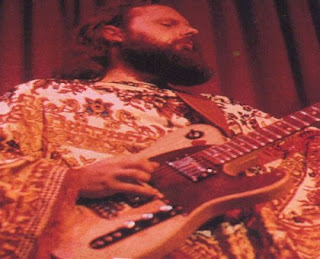 Many years ago, a young Long Island musician placed an ad in the Village Voice looking for a keyboard player and a bass player to join his band. Among those who responded was Donald Fagan and Walter Becker. They went to to become meticulous, edgy and ultimate cool band Steely Dan. And the rest is history! Denny Dias was that young Long Island musician who went on to become a world class guitarist and founding member of Steely Dan. This weekend, Denny will be appearing at "ROCK CON: Weekend of 100 Rock Stars" at the Sheraton Meadowlands Hotel and Conference Center in East Rutherford, NJ.
I had the great pleasure to speak to Denny from his California home just days before his trip back east...

MICK: What was it like for you growing up on Long Island?
DENNY: I grew up in Hicksville. I went to junior high school and high school there. We had some good people. Actually played in a battle of the bands opposite another Hicksville musician Billy Joel. A few other guys I graduated with were in a band that included drummer Mitch Mitchell who plyed with Jimi Hendrix.

MICK: Do you still have relatives on Long Island?
DENNY: No, my family is from Philadelphia. I have one cousin who lives in Manhattan. I haven't been back to the New York City area since 2000.

MICK: When Steely Dan first started out, did you guys play any clubs on Long Island?
DENNY: No we never played any Long Island clubs. We did rehearse in my living room in Hicksville.

MICK: It's been documented that you met Donald Fagan and Walter Becker through an ad in The Village Voice. How did you meet Jeff "Skunk" Baxter [another original Steely Dan member]?
DENNY: They [Fagan and Becker] found him. They got together with Gary Katz and called me from California so I drove across country to join them. They already had a record released "Dallas". So I didn't meet Baxter until I went to California.

MICK: Do you keep in touch with Jeff Baxter?
DENNY: I run into him every once in a while. It's not often though.

MICK: I always thought that "Aja" was one of the best albums I ever heard, even to this day. What was it like to work on this masterpiece?
DENNY: You got your little piece, learned it well and go in to perform it. You don't hear the whole thing until it's done.

MICK: This weekend, you are appearing at ROCK CON, the first annual Weekend Of 100 Rock Stars" set to take place at the Sheraton Meadowlands Hotel & Conference Center in East Rutherford, NJ on July 30 – August 1 (Friday, Saturday and Sunday). Is this the first time you've done something like this?
DENNY: Yes and I'm very excited about it. I know that I will be playing on Sunday at 5:00pm with some of the other guests appearing. Monday I head into Manhattan to play at BB Kings with Spanky and Our Gang.

MICK: Do you have a favorite Steely Dan song that you worked on?
DENNY: It's hard to say. I have some favorite songs that I didn't work on! I guess my favorite solo would be the one on "Green Earrings".

MICK: Do you keep in touch with Fagan and Becker?
DENNY: I haven't seen them sinse the 90's. They played in Los Angeles and I joined them on stage for a few songs. That was fun.

MICK: Who were your heroes when you were growing up?
DENNY: I was always partial to Miles Davis. I thought he was the coolest! There's some good players today but there's nobody of the stature of Miles Davis. Him and John Coltrane, Thelonious Monk were the best. When I saw Thelonious Monk at Queens College, that was really something quite amazing!

MICK: Are you working on any musical projects now?
DENNY: No, not really. I work a full time job. I program computers for a living now. Been doing that for around twenty years.

MICK: What are your future plans?
DENNY: Well, I'm just trying to keep my job!

MICK: Are you ever going to do anything more as far as music goes?
DENNY: It depends. I have a lot of songs that I've written. If we can do something with Spanky, get some songs on a record, maybe something will eventually happen. In the meantime, doing a thing like this is more of an expense than anything else. We are all paying our own way to get there. It's not like the gig is going to support the trip. You can only do that a couple of times a year. So who knows, maybe we will record some music and see what happens.

The Summer's most anticipated festival for music fans and collectors is expected to draw thousands of attendees who will meet, enjoy concerts by, listen to interviews with, and actually hang out with musicians, singers, pop personalities and rock icons from all eras of rock & roll. Along with the live concert performances, meet & greets, and question & answer sessions, there will be panel discussions, rare film screenings, photo ops, a music & memorabliia marketplace, and much more.

Although most of the guest artists will be present the entire weekend, there is a different schedule of events planned for all three days. The highlight of each evening is expected to be the last two hours of the event, when all the stars get to sing or play their hits - and jam on the songs of their fellow singers and musicians - in the hotel's Grand Ballroom Main Stage. Additionally, Friday night will feature the National Rock Icon Awards Ceremony Presentations (the RCIA's), which will not only honor the legends, acknowledge music accomplishments, but also recognize fan favorites.
Themes for the Weekend include "LENNON LEGACY," with special guests from The Beatles' history, "ROCK & ROLL HALL OF FAMERS," "THE GREAT GIRL GROUPS REUNION," "HORROR ROCKERS REUNION" and the "BUBBLEGUM REUNION."
A rock event like this is long-overdue. Celebrate 50 years of rock history live.
Complete info is online at www.RockFanFest.com, and the complete list of guests is available at: http://www.nationalrockcon.com/Artists.htm.
Tickets are $20-$40 with special "Gold," "Silver" and "Platinum" weekend packages available.
For any further info, call (203) 795-4737.
What: ROCK CON: Weekend of 100 Rock Stars
Where: Sheraton Meadowlands Hotel & Conference Center, 2 Meadowlands Plaza, East Rutherford, NJ
Hours: Friday, July 30 2010 5pm-11pm, Saturday, July 31 2010 Noon-10pm, Sunday, August 1 2010 Noon-9pm
Posted by showbizwizard at 5:02 AM