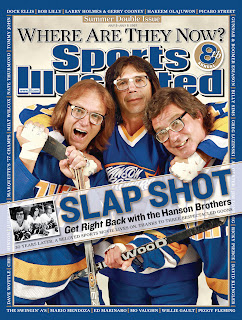 It's been 33 years since one of the best hockey movies of all time was released. "Slap Shot" was a big hit for superstar Paul Newman and it also introduced to the public the very likable, violent goons "The Hanson Brothers", three fictional brothers who all wore black glasses, had long hair and terrorized oposing teams. Their popularity has grown in pop culture throughout the years and they still make appearances to meet their legion of fans. I had the great pleasure to speak with Steve Carlson, AKA Steve Hanson, the other day about his life and the making of "Slap Shot".....


MICK: In the movie "Slap Shot", what was it like to work with Paul Newman?
STEVE: I think you got it wrong. He worked with us! You have to understand that Newman was on the verge of becoming a superstar and Universal Studios said "ok, how are we going to get him over the top". They decided to bring in the Hanson Brothers and teach him. You will notice he won the Academy Award after "Slap Shot"! Let me tell you he was a classic man! From day one when I first met him right until the end, he was all class. What a wonderful gentleman! His passing was a huge loss, not only to the acting world but also in the sporting world and charity world. A truly great man!

MICK: "Slap Shot" came out in 1977. In 1978, you were with the Edmonton Oilers and your room mate was Wayne Gretsky. You were a star at that time. How did you get along with him?
STEVE: There it is again! He was the number one draft pick. They said "He can't skate, he can't shoot that well. We will move him with Steve and teach him how to play the game the way it's suppose to be played". I get no credit for that! In all seriousness, he was only 17 years old and you just knew he was going to be a superstar. It was a lot of fun playing with him. I was told, but I can't confirm this, that I was the only player in NHL history to play with both Wayne Gretsky and Gordie Howe!

MICK: How were you treated around the league after you made the film?
STEVE: If you watch the movie and you think this is real life, a lot of the stuff is actually the way it really was and we just re-enacted this way we played. The bosses of the hockey world didn't like it because it promoted fighting, but every player and every general manager liked it because it was entertaining and funny. It had everything a man wants..vulgar language, nudity and fighting! What else could you ask for? It was fun after we got done filming to go into arenas and everyone was wearing the nose and glasses. We had a good time with that!

MICK: How did you and your brother get the parts of the Hanson Brothers?
STEVE: In real life, the Hanson Brothers played together as a line. My brother Jack, my brother Jeff and myself. We had long hair, we wore black glasses. Jeff and Jack were the ones who were the fighters. Dave Hanson, who was a defenseman on our team at that time, was known as "Killer Hanson". He was a fighter. They tried to find actors to play our parts in the movie and couldn't find actors good enough to skate and play the parts. So they came to us and asked us if we wanted to play the roles. The three Carlson Brothers were going to be the Hanson Brothers in the movie and Dave Hanson was going to be Killer Carlson. Unfortunately, Jack got called up and couldn't do the film so they brought Dave in to be Killer Hanson and Jerry Houser became Killer Carlson.

MICK: Do you still run the power skating school in Wisconsin?
STEVE: Yes I do!
MICK: Do you live on Long Island?
STEVE: I do live on Long Island but I am moving on Monday. I've been here for exactly one year. Moving to California with my fiance who was born and raised in Sacramento. No more snow shoveling for me!

MICK: How many appearances do the Hanson Brothers make a year?
STEVE: Two years ago, we got 385 requests that year. Since Jeff and Dave have normal jobs, we do between 25 and 40 a year. Jeff works as an electrician and Dave manages a multi surface ice arena.

MICK: Do you have any hobbies besides hockey?
STEVE: I listen to music, enjoy myself, watch sports, love gardening. I used to fish a lot but haven't done that in a while. I plan on getting back into that again. I also like working around the house.

MICK: What are you future plans?
STEVE: The Hanson Brothers are actually getting larger and larger! We just did a show in Hershey, PA where we played in a charity hockey game and signed autographs for over two hours! It's not stopping! It keeps getting bigger and bigger!

MICK: What are the details about your appearance this Sunday in Massapequa?
STEVE: We are going to meet and great at Long Island Picture Frame. Fans have a chance to have photos taken with us and we will sign pretty much anything except the McFarlane Dolls. The Picture Frame has put together a bunch of great products of the Hanson Brothers that will be for sale on Sunday. We just love meeting people and having a good time with them!